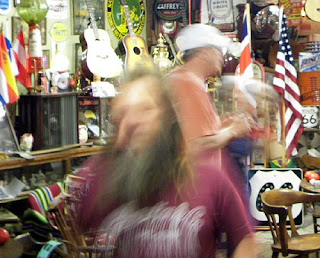 Harley and Annabelle, The Mediocre Music Makers, have announced they will be cutting back on the number of tour groups they will entertain this coming season. Why? At age 63, to spend more quality time with each other, to get more rest and relaxation between tour groups, to have more time to upgrade their Mediocre Tourist District, to expand on musical projects not included in their Mediocre Music Program, and to hone their craft.
"Even though the number of tour groups stopping in Erick to see us has increased each year, we've decided it's getting to be a little too much for us to keep up with.", Annabelle told me a few weeks ago. "We need more time for ourselves and for keeping our chops up to provide the best show possible for the groups we entertain." Harley added.
Last season (April through October, 2008) Harley and Annabelle entertained approximatley 300 tour groups, sometimes hosting three to four consecutive groups a day arriving and departing within minutes of one another. "It's fast-paced and now that we're in our 60s it is getting harder and harder to keep up on enough practice and refinement of our show to keep it fresh and exciting,", Harley said. "Then we're so worn out we don't have the energy to do much together afterward, if you know what I mean." he added, with a wink and a nod.
Posted by The Old Hermit at 7:08 PM

Harley and Annabelle...Both Cathy and I truly missed seeing you last year. I am recovering well and will be in the Mother Road Rally Group again this year in June. Thank You for the words of wisdom while I was in the hospital. May God Bless
Mark and Cathy Irek
Mother Road Rally
04,05,06,07,00ps,09

Harley and Annabelle were one of the top highlights of a trip I took to all 50 states. I'd like to recommend that the City of Erick rename the city after Harley and Annabelle. They are such sweet, very real, very special people. I went from scared when Harley appeared right in my face to loving them like a brother and sister in two hours at The Sandhills Curiosity Shop.

we dropped in, at the end of the day, around 5, just to see what these 2 were all about. they were obviously tired from a full day of entertaining but they had the grace to show my wife and i all around their shop and even took us over to their home which is behind the shop. they are 2 very warm people and i would highly recommend a visit with them if you are every doing route 66..pete and carol, hamilton ontario canada..